LWVT LEADERSHIP THEN AND NOW


THE LEAGUE OF WOMEN VOTERS OF TEANECK


Those listed below  served as President/Leader,  League of Women Voters of Teaneck during the years 1952-2020.

The League of Women Voters of Teaneck is now the 68th year of the League’s work in Teaneck.

Thank you, all women who "stepped up to the plate." 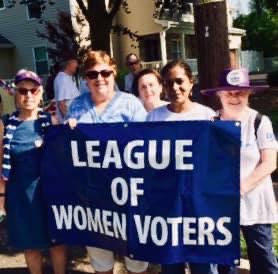 Posted by Patricia O'Brien Libutti at 9:04 AM No comments:

League of Women Voters of Teaneck

LWVT HOSTS DISCUSSION ON “CODE GIRLS” OF WORLD WAR II
On March 28th, the League of Women Voters of Teaneck (LWVT) celebrated Women’s History Month by hosting a public discussion centered around the book "Code Girls: The Untold Story of the American Women Code Breakers of World War II," by Liza Mundy. The U.S. Army and Navy recruited over ten thousand women from diverse backgrounds for World War II code breaking work. The “Code Girls” received military code training and then broke codes to decipher messages about enemy operations in the Atlantic and Pacific. Their endeavors were held to be “war-shortening”; their achievements remained a secret for fifty years due to the confidentiality oath each took.
Margot Fisher, Director, Women’s History for the League of Teaneck, began the evening with an unusual fact: her own mother was a Code Girl. She shared film clips from the March 22, 2019 Library of Congress Veteran’s War History Project "Code Girls Reunion.” Ms. Fisher also relayed anecdotal experiences that her mother, whose story is included in the book, shared with her family many years later.
About 40 people attended, including several members of other Bergen County leagues and Township book groups. Lively discussion took place on issues ranging from the personal feelings and experiences of the “girls” (actually young women recruited from colleges and teaching positions), intricacies of breaking different codes
and changing attitudes towards women in the military.
Below:
Suzann Harpole Embree with her daughter, Margot Embree Fisher and Bill Nye, "The Science Guy," whose mother was also a Code Girl. They were at the Veteran's History Project (VHP) "Code Girls Reunion" held at the Library of Congress on March 22, 2019.

Posted by Patricia O'Brien Libutti at 7:08 AM No comments:

League 1970 book: This is Teaneck: A Community Handbook 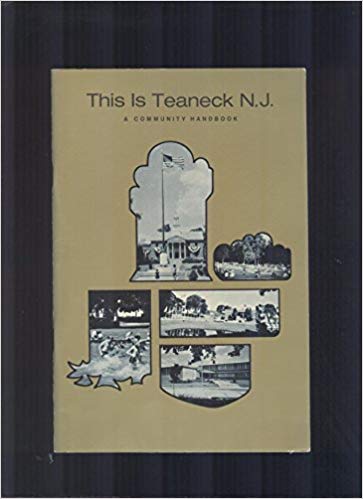 The “Know Your Town” and “Know Your School” titles were publications done by many Leagues in the 50s through 70s. They were a major service to citizens across the USA.
This book record in Amazon shows what Teaneck did, at least one title. Rutgers University has more in their Special Collections Archives—-the whole New Jersey League Collection , in Alexander Library, New Brunswick, under Dr. Fernanda Perrone.

Teaneck’s titles included “This is Teaneck: A Community Handbook”(1961) and “Our Teaneck Schools: A Reference Book on the Local School System”( 1964).The 1970 title on the community was done with the Town Council, and is in our local library.
Maybe for the upcoming Teaneck Township History, there is a step beyond locating the books that you can provide.
If you have high quality PICTURES in PRINT, not digital, 1952—-1980 ( not later) of the ILO with LWVT members in them, too, we would appreciate your lending them.
Write Jay Levin, compiler/writer. jaylevin19@aol.com,about the pictures and books for consideration for the “History of Teaneck”, to be published by Arcadia Press, and is anticipated in early 2020.
If the material is used, your contribution will be acknowledged in the book. And l know, from writing/collating a modest LWV Teaneck history, that getting the pictures out from attics and boxes is the hardest part. It’s even harder than reconciling facts.

Posted by Patricia O'Brien Libutti at 5:32 AM No comments:

Meet Susan Sipprelle, Director of the LWVT-sponsored film for TIFF Nov. 3: Soldier On: Life After Deployment

Soldier On: Life After Deployment
Click on  this link: Soldier On   for film trailer

Directed by Susan Sipprelle
Description: Three women confront the challenges of readjusting to civilian life after their post-9/11 deployments. Their compelling and illuminating stories are presented in the context of a population that has little appreciation for the experiences and sacrifices of female veterans. Sponsored by League of Women Voters of Teaneck; American Legion Post #128; VFW Post #1429; Gooney Bird Detachment of the Marine Corps League
Talkback with Susan Sipprelle, film director

Susan Sipprelle is a League member who directed and produced Soldier On: Life after Deployment. It is a production of Tree of Life Productions , which she founded. Visit Tree of Life to see the trailers and information about the other documentaries Susan produced/directed: http://treeoflifeproductionsllc.com/
Susan agreed to share her  thoughts abut film making, issues central to her film making, as well as  her ideas about this documentary.
Experience with documentary film production – I never planned to become a documentary film producer! I was a commercial banker in Manhattan after I graduated from college. When my husband and I started having children in 1987, I stopped working, although I did complete my MBA from NYU in 1991.

Over the ensuing years, as our family grew in size – we have five children -- I did some articles for local Bergen County papers. A friend, who noticed that I greatly enjoyed reporting, suggested I might want to take a journalism class. An AHA moment! I discovered that Columbia Graduate School of Journalism offered a part-time program, to which I applied and was accepted. At that time, my youngest child was 3 and my oldest was 17.  I concentrated in multimedia and graduated in 2008. 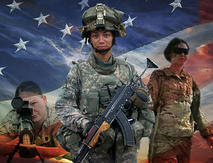 By the late 2000s, the Great Recession had been declared officially over, although its impact remained severe. I, with the help of a recent film school graduate, began a multimedia project called Over Fifty and Out of Work that documented the stories of older workers who lost their jobs due to the downturn. We were asked to testify about our work before the Senate Health, Labor, Education and Pension Committee in June 2011, and we went on to make the documentary Set for Life based on the multimedia project. The film won several film festivals and was chosen by American Public Television for distribution. It has now been shown more than 4,000 times on public television nationwide.


The success of Set for Life inspired me to make another film. As our wars in Iraq and Afghanistan continued to extend, I grew curious about the women volunteering to serve in the U.S. armed forces. Who were they? What happened to them during their military service? And, how did they readjust to life at home once their military service ended?

These questions led me to make Soldier On: Life After Deployment. Both Senator Patty Murray and Congresswoman Annie Kuster sponsored screenings of my documentary on Capitol Hill. The film, also distributed by American Public Television, premiered on Channel 13 in March 2017, during Women’s History Month and has now been shown more than 2,000 times on public television nationwide. Screenings, sponsored by various organizations, have also been held in many states.


Why is the topic of women veterans important? Women today comprise almost 20 percent of the armed forces and 10 percent of the veteran population. They are the fastest-growing segment of the total veteran population. Despite their significant contribution to our country’s safety and security, three-quarters of female service members believe that the public fails to recognize or value their service. Moreover, their experience is set within the broader context that fewer Americans every year understand the commitment, sacrifices and experiences of individuals, both men and women, who serve. After WWII, more than 12 percent of Americans had served in the military. Today, it’s less than one percent.


For female veterans, access to veterans’ services, justice for military sexual trauma, and a supportive veterans’ community is an ongoing battle. Women veterans’ access to quality VA healthcare, community care and mental healthcare is not equal to male veterans’, although gradually improving. Summing up, the complete integration of women into the armed services as well as their full access to veterans’ benefits and the veteran community is a challenging work in process for the United States. Soldier On is part of that conversation and effort.


How did the documentary evolve?  I started this film thinking that I was going to make a documentary about how equine therapy helps female veterans recover from the trauma of war. But as I researched and met women veterans, I found that focus was too narrow a lens (although beautiful to film).


How long did it take to make? More than two years.


What did you learn about deployment and how women experience it?

I learned a great deal about why women volunteer to join the military:


Where women and men differ:  42 percent of women veterans joined the military because jobs were hard to find compared to 25 percent of men. (Pew)

81 to 93 percent of female veterans were exposed to some type of trauma prior to enlistment compared with much lower rates of 51 to 69 percent for the civilian population. (Zinzow et al, 2007) Traumatic experiences include childhood abuse and neglect and domestic violence, which have a significant impact on mental and physical health, family relationships, housing and job stability.

The last point above is the most important issue that I uncovered during the process of making Soldier On. It is the issue that most deeply influences women’s desire to volunteer, their military experience and their vulnerability to significant post-military emotional after effects such as PTSD and depression. Women who choose to join the military are frequently fleeing unstable home environments, where they have already been exposed or subjected to traumatic experiences. They are more vulnerable to the impacts of further exposure to trauma in the military – either through conflict or military sexual trauma.

Another big discovery for me: almost three quarters of American youth are not eligible for military service because they are physically unfit, lack sufficient education, have a criminal record or have a tattoo that is visible while in uniform. Women in the military are not a social experiment, as often described. They are an absolute necessity to our armed forces in terms of numbers (not even considering the benefits of diversity): The military could not meet its enlistment quotas without women volunteers.

What surprises were there in the process? I have described some of the surprises in the above answer. But, additionally, I was looking for three main characters with certain characteristics – homelessness (higher among female than male veterans), different branches of service, a mother, deployment(s).  With only three main characters, I did not expect to uncover, as I got to know them, almost all the significant issues that afflict veterans and women veterans in particular – difficulty transitioning home, relationship problems, depression, PTSD, homelessness, joblessness, suicidal impulses.

New Project? Just getting started on Citizen U.S. What does it mean to be an American? What are your rights as a citizen? Your responsibilities? Has your thinking on what it means to be an American citizen evolved over time?

Posted by Patricia O'Brien Libutti at 8:01 AM No comments:

Bottom: Attentive audience who participated vigorously in Q & A with the candidates. Questions from the audience were read by the moderator to the candidates, who had a set time to respond.

Posted by Patricia O'Brien Libutti at 6:11 PM No comments: 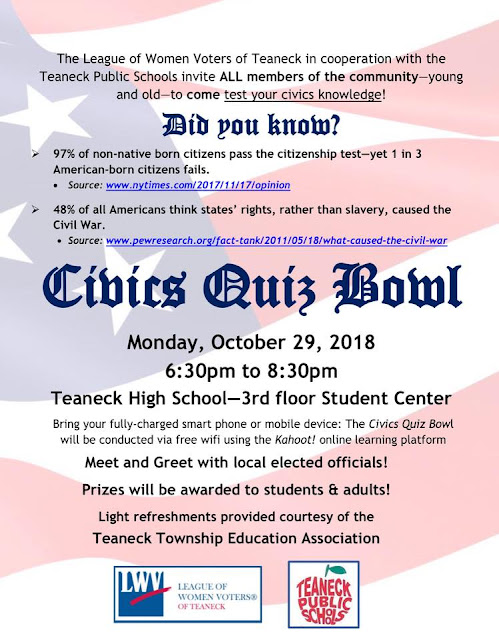 Posted by Patricia O'Brien Libutti at 7:28 AM No comments: